According to The Wall Street Journal, on Tuesday, April 18, the photo messaging app, Snapchat, launched an augmented reality feature that allows users to add special effects to the backgrounds of photos and videos they take on their smartphones. Prior to this launch, these features were limited to images of faces. The new lenses include images like rainbows, clouds, hearts, as well as words. The video below shows the new lens features.

The selfie lenses that came out last year proved popular for brands such as Gatorade. During the SuperBowl this year, Gatorade sponsored a lens that displayed the sports drink being poured over users' heads in a similar fashion to how the drink is poured over the head of the winning team's coach after the game. Below, professional tennis player, Serena Williams, is pictured using the sponsored lens. 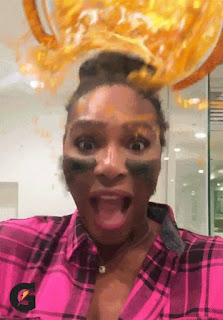 Will the new augmented-reality feature bring in big advertising dollars for Snapchat? Share your opinion on the new feature below.

This blog is a space for intellectual expression, discussion and development in the field of Advertising. The contents of this blog is created solely by students of Duquesne University, Media Department.